Data analytics platform PlayTreks already provides insight into content platforms like streaming services, social media, and other content sharing. By analyzing data gathered on those platforms, PlayTreks gives users a better idea of how their content is performing across their careers – including radio airplay monitoring. But now the platform is expanding its offering with a blockchain-based marketplace for creatives.

PlayTreks’ music distribution platform gives artists 100% of their royalties for a small subscription fee. Now the company is taking that innovation a step further by offering a blockchain-based marketplace. The Playground, as the marketplace will be known, will also feature TREKS. That’s PlayTrek’s very own crypto token to allow users to mint, buy, and sell NFTs on the marketplace. TREKS is scheduled to have it’s ICO on Wednesday, November 11th

PlayTreks says this marketplace will enable artists, producers, and record labels a way to create, trade, and monetize their works using non-fungible tokens (NFTs). With its new blockchain-based marketplace, that gives artists multiple places to generate income. PlayTreks offers, among others, traditional distribution to all streaming platforms and access to a new marketplace for minting, buying, and selling digital collectibles.

“Historically, change has always been a bit scary. Moving on from a system that might have been working well for years (even centuries) but has needed to evolve due to our natural search as a human race for betterment,” says Chris Payne, an ambassador for PlayTreks. “Such is the case with what I’ve heard fellow musicians and composers call ‘The Jurassic music industry.’”

How Does The PlayTreks Marketplace Work? 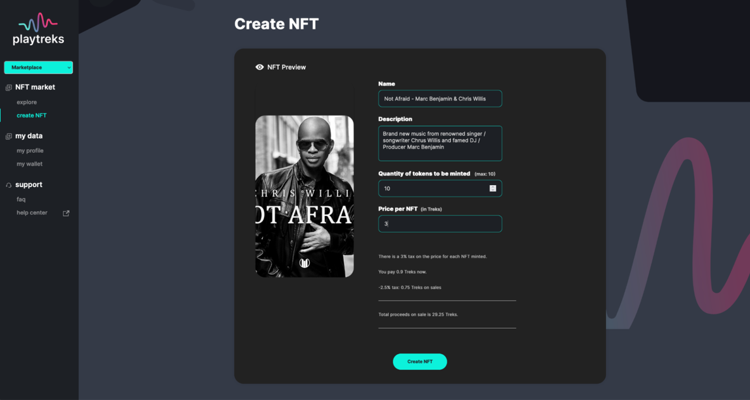 The PlayTreks marketplace is built around minting, buying, selling, or swapping NFTs. But it also offers artists the ability to set up collectibles and crowdfund projects from fans. What’s most interesting about the marketplace is that PlayTreks has created a tool to allow social media users to request the right to use an original track.

The marketplace soon allows users to micro-synchronize a track with the click of a button. A buyer or licensee can temporarily use the track by paying the NFT owner a flat fee – set by the owner. PlayTreks is also introducing its own token, TREKS, to support the marketplace. The token’s initial value is set at $0.50 and offers a quick and effective method of payment for users within the marketplace.

PlayTreks says its coin will soon be listed on exchanges like Coinsbit. TREKS can also be swapped with other tokens using the Ethereum and Polygon networks – giving users an on-ramp for the token before it is listed on major crypto exchanges.